“I promise you this: I will never stop working to end gun violence – to make every community across America safer and stronger, and to create a more just and equal society, for everyone.” 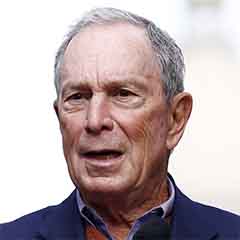 Bloomberg, a billionaire media mogul and political activist, made a late entry into the presidential race, positioning himself as a moderate in the Democratic Party who could challenge President Donald Trump’s business experience.

Accomplishments: After studying electrical engineering at Johns Hopkins University and earning a Harvard MBA, Bloomberg began his career at a Wall Street brokerage company before founding the media and financial services company that bears his name. Bloomberg LP revolutionized stock exchanges with its use of computer terminals and made Bloomberg, whose fortune Forbes estimates to be more than $50 billion, one of the richest people in the country. The billionaire entered the political world in 2001, becoming a three-term mayor of New York City, running initially as a Republican and then as an independent. After leaving office, Bloomberg has spent vast sums of his political fortune on progressive political causes, including gun control, climate change, and helping Democrats win political offices across the country.

Foreign policy: Bloomberg has long been an advocate of free trade and has lobbied against President Donald Trump’s efforts to impose tariffs on goods from China. He has also strongly criticized Trump’s decision to pull out of the Paris climate agreement.

What sets him apart: Bloomberg entered the presidential race late in the game, more than 15 months after the first candidate – John Delaney – entered the race, saying he was worried that none of the large field of Democratic candidates could defeat President Donald Trump. Bloomberg, 77, a Republican-turned-independent who registered as a Democrat only in 2018, is the second-oldest candidates in the race, younger only to Bernie Sanders, who is 78. He is the second billionaire in the race, after Tom Steyer, and is not afraid to spend his money on political causes and his own political ambitions. Bloomberg spent $84 million of his own money to win reelection as New York City’s mayor and spent another $108 million four years later to win a third term as mayor. In 2018, he spent $100 million to help Democratic candidates regain control of the U.S. House of Representatives.

Platform: Bloomberg has long been a political activist, spending vast amounts of his wealth on progressive causes, including efforts to combat climate change and gun violence, as well as championing immigration reform. On all three issues, he has created large nationwide organizations to enact changes in cities and states across the country.