Soldiers of China’s People’s Liberation Army (PLA) Navy patrol near a sign in the Spratly Islands, known in China as the Nansha Islands, February 9, 2016. The sign reads “Nansha is our national land, sacred and inviolable.” REUTERS Fishing: According to the U.S.-based Center for Naval Analyses, China has the largest fishing industry in the world, catching an estimated 13.9 million tons of fish in 2012, which constituted 17.4 percent of the world total.
Fossil fuels: H-981 Oil Rig in the Paracel Islands; the China National Offshore Oil Corporation (CNOOC), the only Chinese company with deep sea drilling technology, opened up energy reserves near the Paracels in June 2012 to international bids in a move to dissuade Vietnam’s foreign lessee’s from developing the oil and gas resources in those blocks. CNOOC also deployed the deep water drilling platform HYSY 981 near the Paracel Islands in May 2014, leading to severe protests from Vietnam. The rig was removed in July, a month before scheduled completion of drilling activities. CNOOC later claimed that it had all the data it needed and would study it in Hainan.
Shipping lanes, trade: According to the U.S.-based Center for Naval Analyses, top Chinese official are concerned seaborne trade security, and that a 2015 defense white papers gave prominence to PLA sea lane protection.
Tourism: Hainan district government efforts to nurture tourism on the Paracel and Spratly islands and has sparked protests from fellow claimants.

China has worked to expand its physical presence in the South China Sea by rapidly developing man-made islands. In less than one year, China transformed Fiery Cross Reef into a military-ready installation with an airstrip capable of landing fighter jets and large commercial planes. These tiny artificial islands are created by dredging sand onto the surrounding coral reefs. The Fiery Cross Reef installation now includes sea-walls, a deep-water port, an airstrip, a track, multiple tennis and basketball courts, a hospital, a farm, radar facilities, and other military buildings. The Fiery Cross Reef airstrip is long enough (3km) to land any plane, from fighter jets to large transport aircraft to commercial planes. In addition to escalating geopolitical tensions, China has been criticized for the environmental impact on fragile reef ecosystems through the destruction of habitat, pollution and interruption of migration routes. China has created more than 3,200 acres of new land. “We are strongly committed to safeguarding the country’s sovereignty and security, and defending our territorial integrity.” 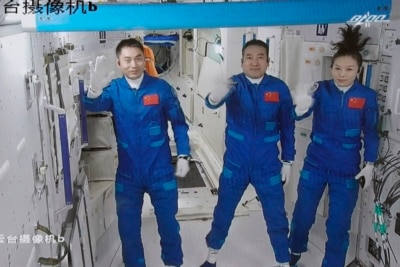