Watch part 3 of the documentary

The Costs of Restoration

Buras, La. Dark gray rain clouds hung on the horizon on a humid morning near the tip of the Mississippi Delta. Ryan Lambert spotted alligators, roseate spoonbills and several species of ducks as he steered his boat slowly past islands of reeds. 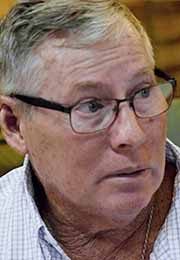 Lambert is in his element. He’s been a hunting and fishing guide for more than 40 years. Speckled trout and redfish swim these waters, he said, as well as the ducks that ply the surface. It’s because of places like this that Louisiana’s license plates declare it “Sportsman’s Paradise.”

“I’ve seen the best of it,” Lambert said. “And when I see it going away, that’s what makes me so passionate about trying to save it.”

Lambert has watched the ground to the west of his lodge in Buras, Louisiana, slip into the Gulf of Mexico. Swaths of land are simply gone. Wooden pilings poke out of the water where homes once stood. 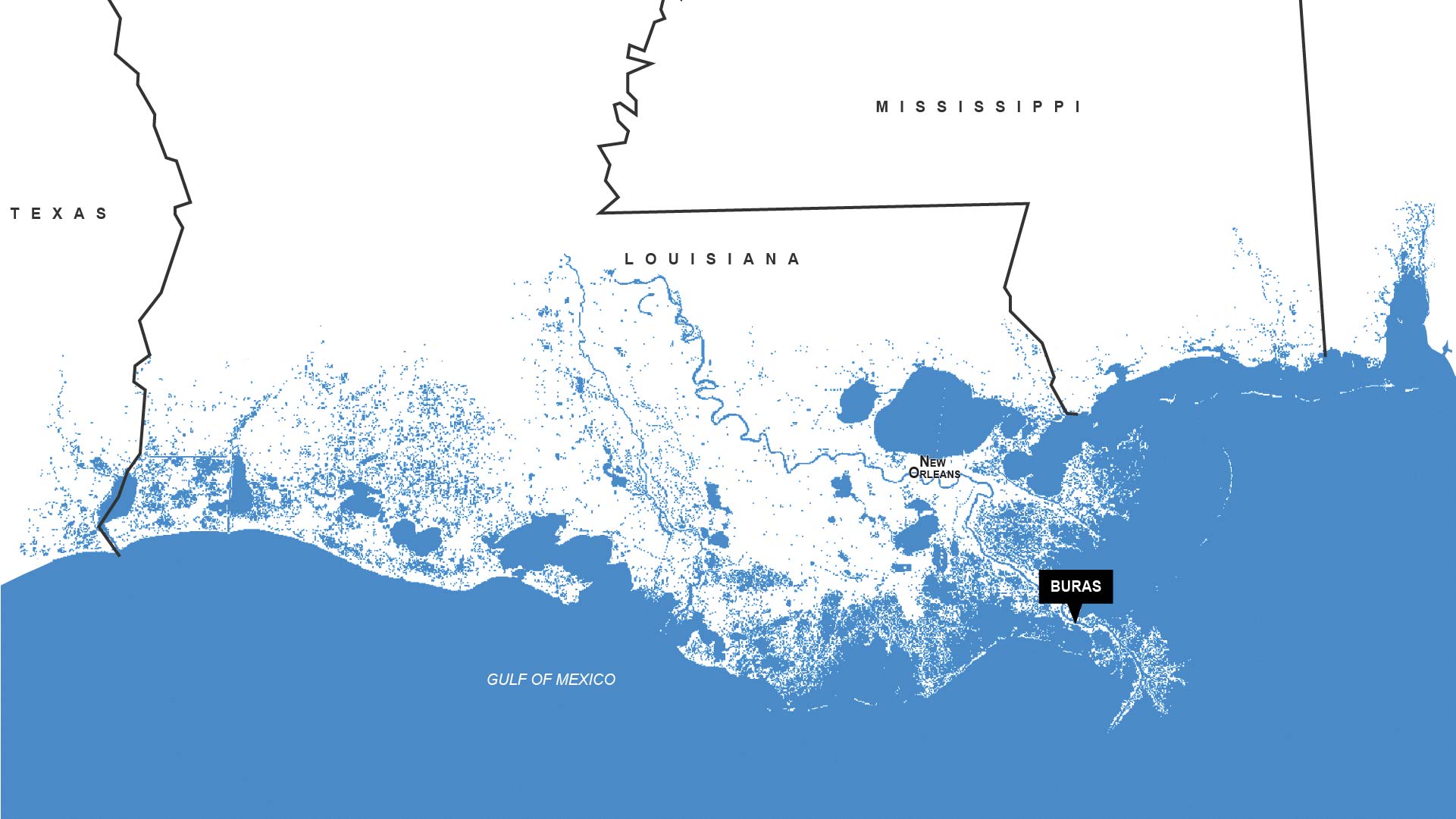 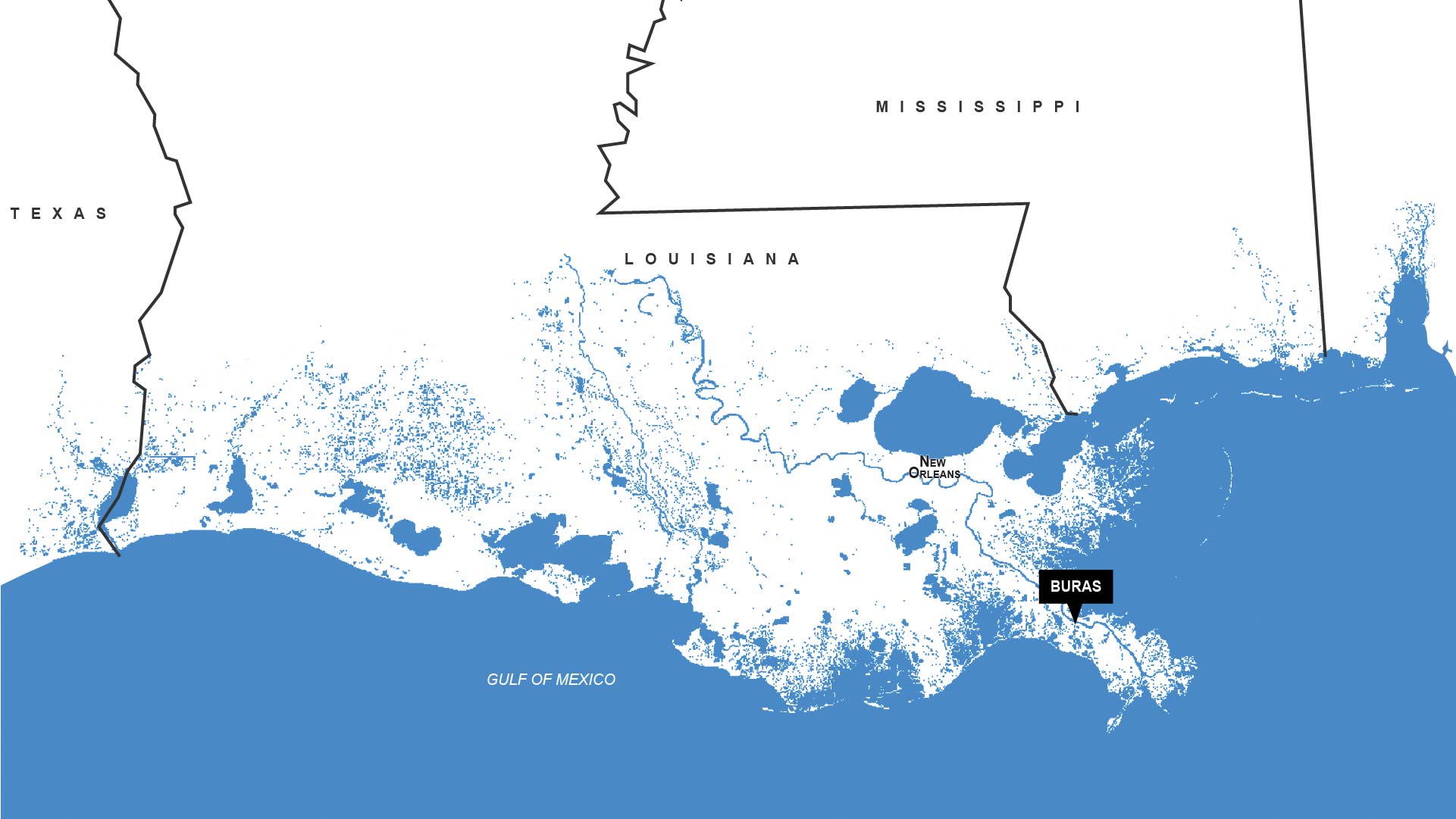 Land is disappearing all along the state's Gulf coast. Half a million hectares (1,900 square miles) of its coastal wetlands — an area the size of the state of Delaware — have washed away since the 1930s.

Wetlands are more than just a sportsman’s paradise. They are vital habitat for the state’s $2 billion fishing industry. And they are a critical buffer for the state’s population and industrial centers against devastating hurricanes.

The losses are accelerating. Seas are rising faster as the planet heats up under climate change. Up to another million-plus hectares (4,120 square miles) may erode in the next 50 years. That’s about one-tenth of the state’s total land area, equivalent to most of the state of Connecticut.

New land is emerging where the muddy Mississippi River meets the Gulf of Mexico in Bay Denesse, near Buras, La., Aug. 3, 2021.

New land is emerging where the muddy Mississippi River meets the Gulf of Mexico in Bay Denesse, near Buras, La., Aug. 3, 2021.

A cargo ship sails up the Mississippi River near Buras, La., Aug. 3, 2021. For the past century, the river has been locked behind levees built for flood control and navigation, cutting off the supply of land-building sediment. (VOA News)

LEFT: Bren Haase of the Coastal Protection and Restoration Authority scoops mud from the Mississippi River near Buras, La., Aug. 3, 2021. Sediment washing down from 31 U.S. states and two Canadian provinces created southern Louisiana over millions of years. (VOA News) RIGHT: A cargo ship sails up the Mississippi River near Buras, La., Aug. 3, 2021. For the past century, the river has been locked behind levees built for flood control and navigation, cutting off the supply of land-building sediment. (VOA News)

Louisiana has a 50-year, $50 billion plan to try to stanch the bleeding. An aggressive program to restore marshes and build up barrier islands is underway.

It won’t be enough. The state still expects to lose more land than it gains. Officials hope to save what they can.

But there will be winners and losers.

The project with the biggest footprint, known as the Mid-Barataria Sediment Diversion, aims to build thousands of hectares of land in the rapidly eroding Barataria Basin about 30 kilometers (19 miles) south of New Orleans.

But saving the land may come at the expense of the people who work the waters.

“The diversion they are designing is going to wipe out this industry,” said oyster fisher Brad Robin. “We’re fighting for our livelihood.”

Men building a protection levee in the floodwaters in Cottonport Louisiana during the great flood of 1927. (Photo courtesy of State Library of Louisiana)

Louisiana’s land loss crisis is a problem of its own making.

After disastrous flooding in 1927, engineers built a system of levees to contain the Mississippi River. In the process, they cut the land off from the mud that sustained it.

The Mississippi carries sediment washed down from 31 states and two Canadian provinces. Over millions of years, it has deposited that sediment where the river meets the Gulf, building the Mississippi Delta.

The levees severed that connection. Without sediment to build it up, the land has been eroding away ever since.

Making matters worse, canals slice up the coastal marshes. Cut for oil and gas drilling and navigation, they allow salt water to penetrate deeper inland, rotting away the wetlands.

The land is also sinking naturally as millennia of river mud compress and subside. Climate change compounds the problem. Warmer temperatures are melting polar ice and expanding the oceans. Seas are rising faster in Louisiana than anywhere in the country, and the pace is increasing.

But there is another story to be told on the opposite side of the river from Lambert’s hunting lodge.

Connected to the river

Lambert stepped off his boat into a dense thicket of willow trees 2 meters (6 feet) high growing on the edge of Bay Denesse. These trees were not here last year, he said.

“The only reason this is here is because it’s connected to the river,” Lambert said.

Hurricane Camille blasted channels between the Mississippi River and the Gulf here in 1969. Big Muddy The Mississippi has been filling up the bay with sediment ever since.

Lambert, with help from conservation nonprofit Ducks Unlimited, built some terraces in the bay last year to slow down the water and help the process along. The ground has just risen high enough for the willows to take root.

“It just warms my heart,” he said.

The biggest exceptions to the state’s land loss crisis are the few places where the river is allowed to meet the Gulf.

That’s why engineers are planning to build the $2 billion Mid-Barataria Sediment Diversion about 55 kilometers (35 miles) upriver from Lambert’s lodge. A 3-kilometer (2-mile) channel would cut through the levee and deliver water and sediment to the river’s rapidly eroding west side.

“It’s the way that Mother Nature had it in the first place,” Lambert said. “We’re just returning it to what it is supposed to be.”

CPRA expects it to build 5,000 to 10,000 hectares (20 to 40 square miles) over 50 years. If sea level rise is on the high end of projections, the agency says about one-fifth of the wetlands remaining in the Barataria Basin will only be there because of the diversion.

“We can’t save everything,” Lambert added, “but we can pick and choose what we can save.”

But where Lambert and the CPRA see creation, shrimp and oyster fishers see destruction.

About 48 kilometers (30 miles) upstream of New Orleans, the Bonnet Carre Spillway is like a safety valve on the Mississippi River. When the river gets too high and threatens to flood the city, the spillway diverts water into Lake Pontchartrain and the Gulf.

In 2019, the wettest year on record in the upper Mississippi watershed, engineers opened the spillway for 123 days. That was the longest period since it was built in 1931.

The flood of fresh water altered the chemistry of the estuary north of the Mississippi Delta, killing or pushing out creatures that live in saltier waters. That includes shrimp and oysters, the state’s most valuable and third-most valuable catch, respectively.

“In its path, it killed everything,” Robin, the oyster fisher, said.

Robin sees the same outcome from the Mid-Barataria Sediment Diversion.

A quarter of Louisiana’s shrimpers and oyster fishers work in the Barataria Basin. They are the lifeblood of many communities along the rim of the basin.

The environmental impact report from the U.S. Army Corps of Engineers confirms Robin’s fears. It says the shrimp and oyster fisheries would suffer “major, permanent, adverse impacts” from the diversion.

“We’ve adapted to every storm. We adapted to (seafood) imports, adapted to the high price of fuel. But what we can’t adapt to is the state government trying to put us out of business for good,” said George Ricks, head of the Save Louisiana Coalition, which represents fishers, seafood companies and coastal residents who oppose the diversion.

A shrimp boat sails near Leeville, La., Aug. 8, 2021. Many Louisiana shrimp and oyster fishers are concerned about the impact that the Mid-Barataria Sediment Diversion will have on their industry.

A shrimp boat sails near Leeville, La., Aug. 8, 2021. Many Louisiana shrimp and oyster fishers are concerned about the impact that the Mid-Barataria Sediment Diversion will have on their industry.

Oyster fisher Brad Robin opens a mollusk at his dock in Hopedale, La., Aug. 5, 2021. Oysters depend on a balance of salt and fresh water, which the diversion would alter in some areas. (VOA News)

Oyster fisher Brad Robin examines a sample under a microscope at his dock in Hopedale, La., Aug. 5, 2021, while Save Louisiana Coalition head George Ricks looks on. (VOA News)

LEFT: Oyster fisher Brad Robin opens a mollusk at his dock in Hopedale, La., Aug. 5, 2021. Oysters depend on a balance of salt and fresh water, which the diversion would alter in some areas. (VOA News) RIGHT: Oyster fisher Brad Robin examines a sample under a microscope at his dock in Hopedale, La., Aug. 5, 2021, while Save Louisiana Coalition head George Ricks looks on. (VOA News)

It’s not that fishers don’t see the land disappearing. They point to the maps on their GPS displays that show land where there is none.

“We all want coastal restoration, no doubt about it. We see it disappearing every day,” Ricks said. “There’s a better way to do things.”

He said the state should be dredging: using sediment from the bottom of the river or the Gulf to build up land.

Haase, with CPRA, said the state needs both: dredging and diversions.

“We can’t afford to leave any tool unused,” he said.

Dredging is the largest portion of the state’s restoration budget, Haase noted. But he said Louisiana can’t dredge itself out of its land loss crisis.

As soon as a dredging project is finished, “the same factors that caused the land loss in the first place are acting on that newly created land. And it’s a finite amount of time before it’s gone, too.”

The diversion’s steady stream of sediment is more cost-effective in the long run, he added.

Haase acknowledged the diversion will not be good for everyone.

“Is that going to impact people? Of course it will.” But doing nothing and letting the land wash away will have impacts, too, he said.

And the state plans to help, he added. It has set aside $305 million to pay for bigger boats for fishers who have to go farther out into the Gulf, or for new fishing gear for those who want to pursue a different catch. It could cover business training for people looking to get out of commercial fishing altogether.

Ricks, with the Save Louisiana Coalition, called the $305 million “laughable. That’s not a drop in the bucket.”

He noted that the Louisiana fishing industry was awarded $58 million in disaster relief from the 2019 Bonnet Carre Spillway opening alone.

Many say fishing is all they know. What is threatened is a culture going back generations.

He wants his children and their children to carry on the tradition. But he’s not sure they can.

A Coastal Protection and Restoration Authority dredging project builds up Isle Grande Terre, La., Aug. 7, 2021. Many fishers want the CPRA to do more dredging instead of building the Mid-Barataria Sediment Diversion. (VOA News)

Louisiana is going to lose ground regardless of what the state does. Its adaptation plan contains a startling admission, in bold type at the front of the report: 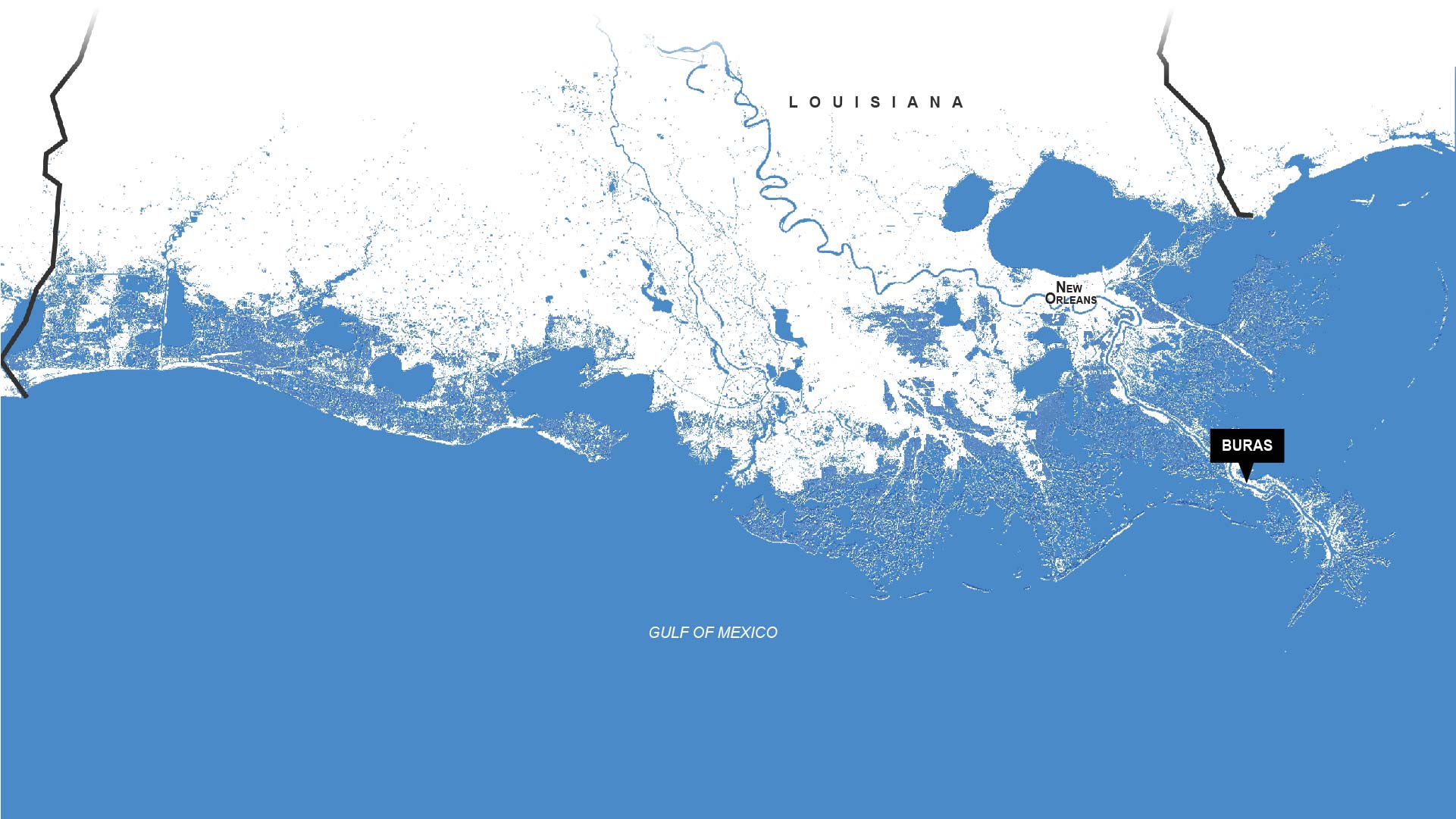 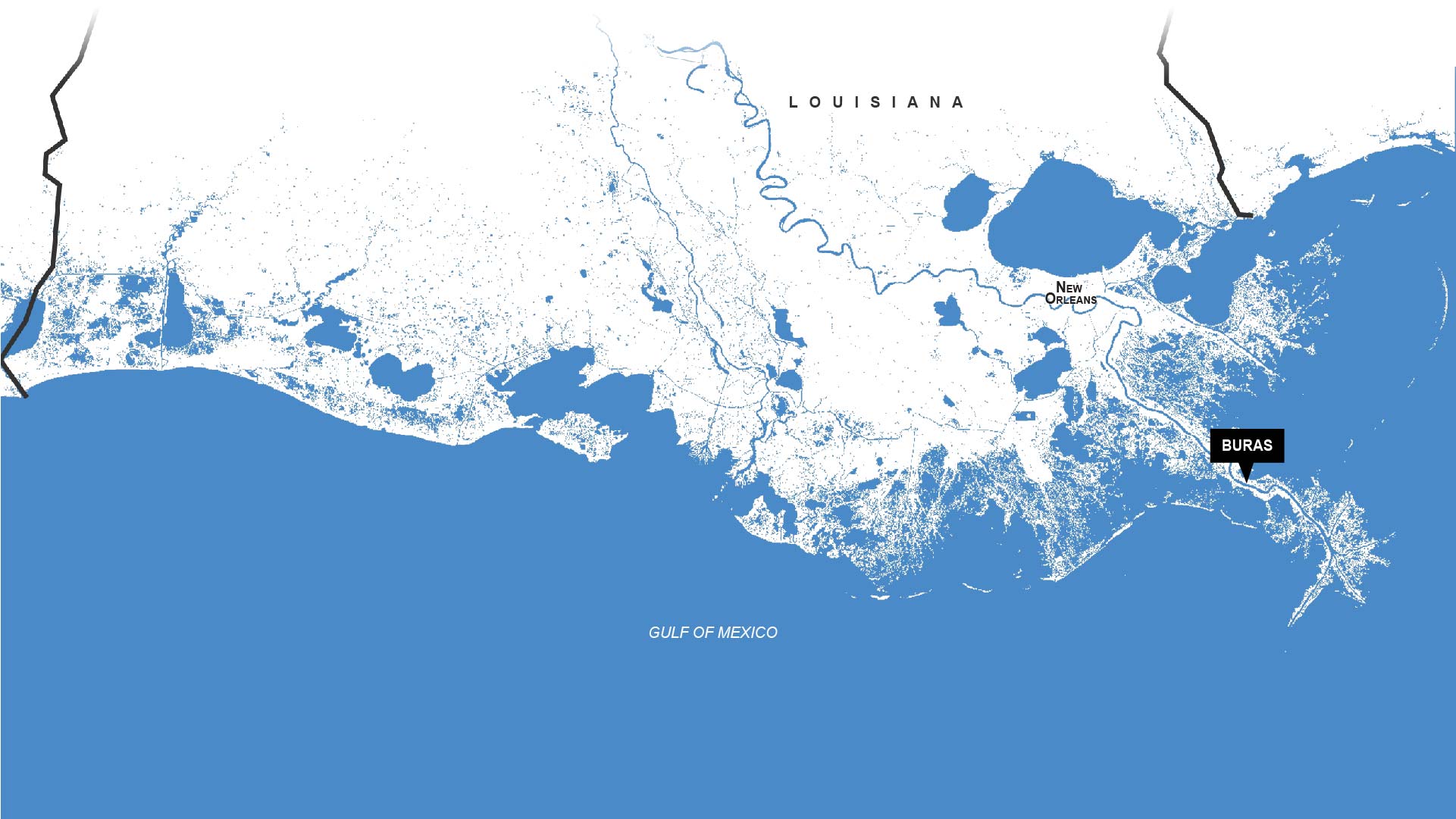 “During the next 50 years, Louisiana is projected to lose more land and wetlands along its coast than it can rebuild, even if restoration efforts are completed as currently planned.”

For Ricks, that means the industry should be allowed to die a quiet death.

“We can try to manage that change for the most good for the most people,” he said. “Or we can allow the coast to continue to deteriorate and inflict its will on us. And that’s not an option.”

The state expects to make a final decision by late next year, with construction slated to begin in 2023.