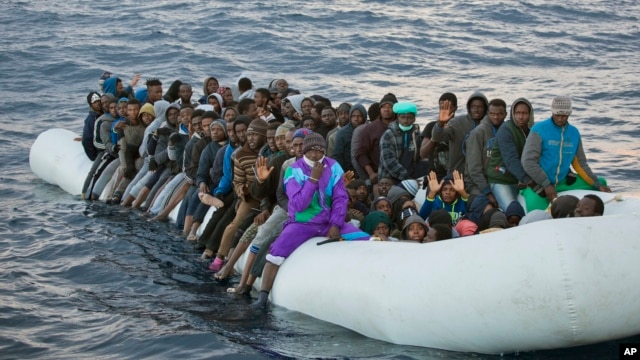 Migrants and refugees crowd aboard a rubber boat sailing out of control in the Mediterranean Sea about 21 miles north of Sabratha, Libya. (AP)

Stories of the displaced from around the world

By the United Nations’ count, conflicts and persecution displaced some 16.2 million people in 2017 alone, adding to a total of 68.5 million. That's somewhere between the entire population of the United Kingdom (66.6 million) and Thailand (69.1 million).

Click through the map to see our coverage since last June, from the conflicts that forced people out of their old hometowns, to the lives they establish in their new ones.

Moreover, that number surged to nearly 3 million more than in 2016 - the UN calls it the biggest increase in a single year.

These include people who found safety in another part of their country, or in another country.

As a news agency with hundreds of reporters in Washington and around the world, we thought we had covered a lot in the 12 months since the last UN World Refugee Day. VOA’s English language website alone has more than 1,700 stories referencing refugees in the last year. We thought we had been diligent about monitoring the Trump administration’s sharp cuts to the US refugee program. We have hundreds of datelines from camps for the internally displaced and refugees from Cox’s Bazar in Bangladesh to Iridimi camp in Chad, from warzones and ISIS-held areas in Iraq and Syria, from the Venezuela crisis and the southern US border.

Yet with the latest UN data, all of those stories still seem to fall short of the massive scope of displacement worldwide.

Stories of the displaced from around the world

Click through the map to see VOA’s refugee coverage from the last year—from the conflicts that forced people out of their old hometowns, to the lives they establish in their new ones.