Several women gather each week in the Fulton Community Center in Fulton, Ill., to talk and work on sewing and crochet projects, but one thing they don't discuss is politics.

To the hum of sewing machines, several women gather each week in the Fulton Community Center in Fulton, Illinois, to converse and work on sewing and crochet projects. Because they have different positions on politics, they tend to avoid the subject.

Taking a break from her stitching, Linda Ebersole from the town of Rock Falls, in the eastern part of Whiteside County, told us she tried to look objectively at each candidate, but found neither of them to her liking.

“We were voting for the lesser of the two evils when it came down to the end,” she said.

Ebersole said Republican Donald Trump was unpredictable, so she found it hard to put much faith in what he said, but Democratic candidate Hillary Clinton had been untruthful on numerous occasions and showed a lack of respect for voters, including her description of Trump supporters as a “basket of deplorables.” 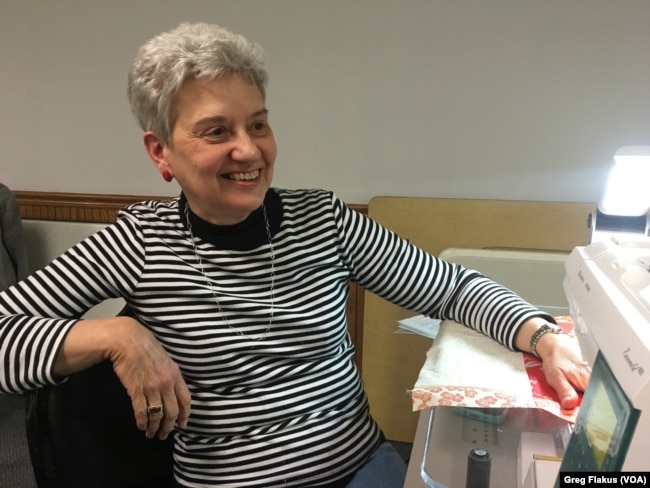 Linda Ebersole, of Rock Falls, Ill., takes a break from her weeking sewing gathering at the Fulton Community Center in Fulton, Ill.

In the end, the retired nurse voted for Trump because he seemed sincere in wanting to bring about change. Now, she said, she worries that his path forward may be blocked by the national news media.

“Anytime there is a little hint that maybe Trump has done something wrong, they take that little tidbit and just grow it way out of proportion,” she said.

She said this unfair treatment, as she perceives it, makes her even more supportive of the president.

She says she watches mainstream television network news and reads her local newspaper, but that since the election she has been spending more time watching the conservative-leaning cable network Fox News, which she said does a better job of providing balance.

Trump is also a fan of the pro-administration network and dismisses more critical media as “fake news.”

Ebersole is concerned by the number of young people she knows who pay little attention to the news. Young people do watch popular entertainment programs that she feels ridicule conservatives and rarely target liberals.

Immigration is a major national issue that resonates in Whiteside County, even though there are relatively few immigrants. She said immigrants who come here legally and are willing to assimilate should be welcomed with open arms, as are foreign-born health professionals who live here. But she said she has experienced cases of culture clash with Muslim immigrants.

She said an old woman in a long dress and a head scarf that covered everything but her face cut in front of her while she was waiting in line at a store. She spoke to the younger people with the woman, but they just shrugged their shoulders.

“She was the matriarch of the family and she did not think she needed to wait in line,” Ebersole said. “They came here and they need to fit in as much as possible. They need to assimilate to the country they are in.”

Likewise, she said, the United States should not have to accept immigrants who violate immigration laws by either overstaying visas or sneaking across the border. “They need to do it legally,” she said.

Ebersole said she agreed with President Trump’s attempts at a temporary ban on immigrants from six Muslim-majority nations because of the threat of terrorism. She said refugees need to be thoroughly vetted and the number the country accepts needs to be reasonable.

“We cannot take in everyone from the whole world,” she said. 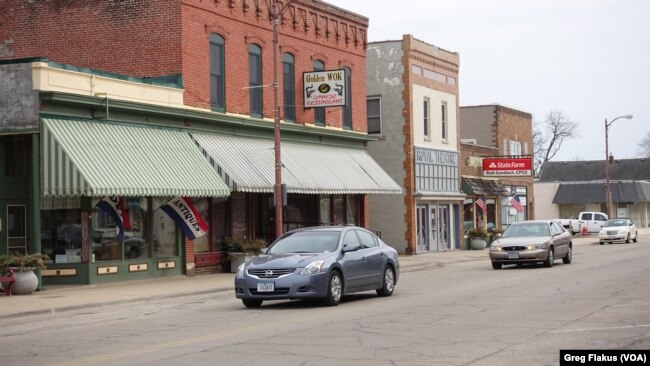 In rural Illinois, including towns like Fulton on the western edge of Whiteside County, there are common sense ideas held by people across the political spectrum, says one resident, Linda Ebersole.

Ebersole said these are common sense ideas held by people across the political spectrum in rural Illinois.

Former Secretary of State Clinton was born and raised in Illinois, as was one of modern conservatism’s heroes, the late President Ronald Reagan, who was born in Whiteside County, in the town of Tampico, and raised one county to the east, in Dixon, Illinois. Some of Reagan’s relatives are buried in the Fulton cemetery.

Despite the divisions the last election exposed, Ebersole believes both of these very different politicians shared basic beliefs.

“You have a lot of common core values that you agree about,” she said. “I think that is the strength of this area that you do have those values, like family, a lot of times faith. You do have those basic things that are more important in a way than what the politics are doing.”