“I was born in that house,” Marion Eden said, pointing to the two-story brick house nearby. Eden, 79, has been farming near Elizabeth, Ill., he entire life.

After pulling on high rubber boots, 79-year-old Marion Eden walked over to the lot adjacent to his barn to check on a few Black Angus cattle huddled together near a feed shack. He has been farming here on this land near Elizabeth, Illinois, since he was 5 years old.

“I was born in that house,” he said, pointing to the two-story brick house nearby.

“In those days, you went to work pretty young, and I have been at it now around 75 years, mostly working with cattle,” he said.

He has 25 head of cattle right now and also rents some of his land to another farmer to grow soybeans and corn. The only crop Eden harvests is hay, which he feeds to his cattle.

Only child on the farm

None of his seven brothers and sisters remained in farming, and they now live all over the country, with children and grandchildren who are far removed from the land.

“You have to really want to do it,” he said. “You have to have a love for it over a period of time in order to get into it very big.”

He has an urban-dwelling daughter who visits him occasionally and enjoys the beauty of the landscape and the abundance of stars that can be seen at night.

Acquiring a farm is difficult if a young person does not inherit it or have the money to buy land. About 62 percent of all U.S. farmers are age 55 or older.

Eden cites the uncertain nature of the business in which farmers can lose a crop to hail or drought, but are punished by the market if they produce yields so big that the law of supply and demand drives down prices.

Eden feels sorry for a young farmer trying to succeed at a time when fertilizer, farm machinery and the purchase or rent of mechanized combine machines for harvesting make it difficult to come out ahead.

“If he has a bigger yield,” Eden explained, “it is going to cost more to combine (harvest) that yield or dry the grain, and if he gets a lower price, he is actually coming out with less net income.”

There is a U.S. government program offering farmers insurance to help them if there is a disastrous crop failure, part of the $20 billion or so the federal government provides farmers through subsidies. But Eden says the premiums are high and the market remains tricky.

A vote for change

Farmers, he said, are conservatives who almost always vote Republican, but there are more Democrats in larger towns in Jo Daviess County, and they helped President Barack Obama win the county in 2012.

But in last November’s election, most votes went to Donald Trump, meaning some former Obama supporters had switched sides.

“I think people were voting for a change,” Eden said. “No matter how they voted in the recent past, it seemed to be the same.”

Eden follows the news, but he says many of the issues discussed on the national level seem strange when viewed from the perspective of a field in northwestern Illinois.

Terrorism, for example, concerns him as an American and because he has loved ones in other parts of the country. But he said, “Living here, it is not anything that I am that concerned about.” 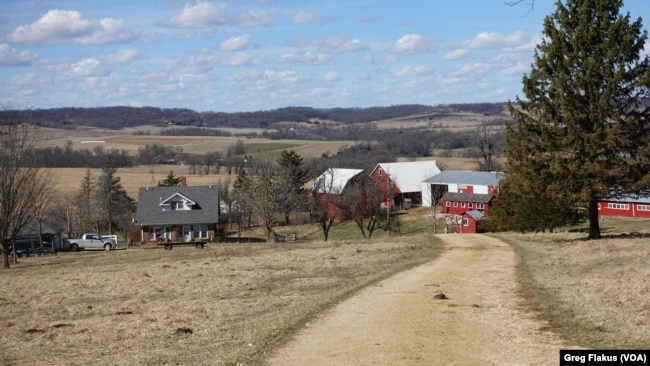 Marion Eden, who farms outside Elizabeth, Ill., understands why few young people go into farming now. “You have to really want to do it,” he said. “You have to have a love for it over a period of time in order to get into it very big.”

The same goes for immigration, which has had no real impact in this area.

The kind of farming done here does not rely on the intensive labor most immigrants engage in elsewhere.

The few immigrants found in Jo Daviess County mostly work in hotels and restaurants in Galena, a tourist town where city leaders are debating how welcoming they want their city to be as the Trump administration takes aim at “sanctuary cities,” those that won’t help federal authorities detain people who have violated U.S. immigration laws.

But even though Galena is only a half-hour’s drive away, what happens there is not of much consequence for people living in the countryside.

Eden, who supplements his income working for a local farm insurance company, said he stays clear of politics.

As for farming, as he approaches the age of 80, he said he plans to continue as long as his health is good.