Josh Kness, a sales clerk at the Mount Carroll Home Center in Mount Carroll, Ill., has helped farmers find what they need for the past 15 years.

“What can we do for you today?” asked sales clerk Josh Kness as the farmer came up to his counter. He was looking for some bolts of a particular size and gauge and within a few minutes Kness had them on the counter and completed the transaction.

On almost every day of the week in rural America there are farmers driving pickups into towns where supplies and support services are available.

In Mount Carroll, Illinois, the county seat of Carroll County, they often pull up in front of the Mount Carroll Home Center. The store sells many items to spruce up a home, but it also sells a wide variety of hardware items, tools and farm supplies.

Kness has helped farmers find what they need for the past 15 years. Having grown up here, he understands the business of farming. The Mount Carroll Home Center in Mount Carroll, Ill., sells many items to spruce up a home, but it also sells a wide variety of hardware items, tools and farm supplies.

“They buy fencing materials, barbed wire, gates, bailing twine, feed, nuts and bolts,” he said, “anything they need to make their operation go.”

But the drop in grain prices over the past two years has set many farmers back, according to Kness, and that has also reduced business at the store.

“It’s pretty simple, if they don’t got money,” he said, “they don’t shop. I mean they are not fixing as many fences; they are not buying anything new. They are just not spending.”

Farming is the heart of the economy

Small towns in rural areas rely to a great extent on farmers for their customer base.

If farmers reduce their spending, everyone feels the impact, including the feed and fertilizer store, the soil-testing technician, the veterinarian, the local dentist, the druggist, the grocer, and the car and truck salesman.

But Kness says farmers in Carroll County have accepted their setback as part of life in agriculture and are looking forward to better times.

“They are itching to get back in the fields again,” he said. 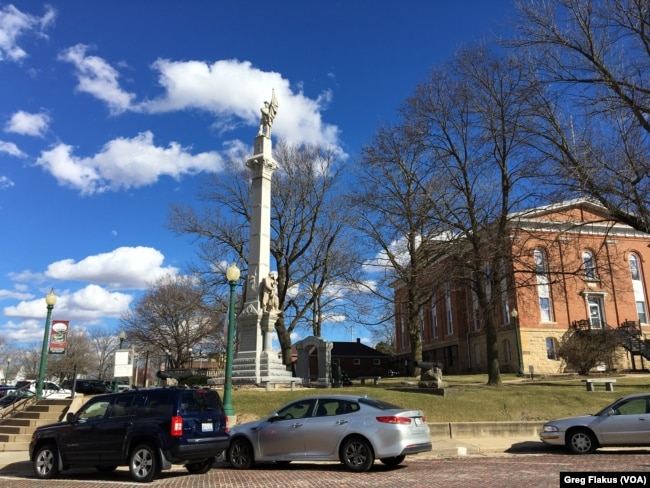 Mount Carroll is the county seat of Carroll County in Illinois, and like many courthouses across the US Midwest, has a memorial to the US Civil War. During that war, the courthouse also served as a barracks for the county’s troops.

Kness said the Trump victory “left a lot of people shook up.” Still, he said, most people, even many who did not vote for Trump, seem willing to give him a chance as he begins his term in office.

Kness said people in this rural area don’t follow the debates in Washington very closely. He said international events draw even less interest, even though area farmers sell a lot of their corn to other countries.

There are few immigrants living in the town, but Kness said many foreign tourists pass through Mount Carroll in the summer.

The Mississippi River forms Carroll County’s western edge, and there are many sites along the river to visit.

Kness said he has noticed in particular a large influx of Chinese during the warmer months. He said some come in to the store to buy bait for fishing.

Since few of them speak English he said he manages to communicate through gestures and an impromptu sign language that he demonstrates with a chuckle.

He said the Chinese have made investments in businesses in the area and purchased some buildings in Mount Carroll.

“I wonder what they are really doing,” Kness said with a smile. He said the small-town rumor mill has been pretty active since the Chinese investors started coming around.

In 2012, the FBI accused seven Chinese nationals of stealing highly developed specialized seeds in Iowa and Illinois and attempting to smuggle them out of the country. But economic development officials working with Chinese investors argue that such incidents are rare and note that the billions of dollars China has invested in the United States have added more than 80,000 jobs to the U.S. economy.

Kness, though, pays little attention to such high-level matters, saying he plans to “just take it day by day.”