Ron Gruenhagen, a farmer from Muscatine, Iowa, says U.S. farmers are very dependent on foreign markets. “If we didn’t have them we would be flooded with grain and soybeans and maybe we wouldn’t know what to do with it,” he said.

Iowa Farmers Depend on International Markets

Washington creates regulations, but many of their consumers are in China.

Seventy-three-year-old Ron Gruenhagen is the descendant of German immigrants who came to Iowa in the mid-19th century. Muscatine and surrounding counties in Iowa and Illinois constituted much of the world they knew back then and much of what they produced was consumed nearby. Today, however, some operations are controlled by rules made in Washington, and the crops’ major consumers are half a world away, in China.

“We are very dependent on our foreign markets,” he said. “If we didn’t have them we would be flooded with grain and soybeans and maybe we wouldn’t know what to do with it.”

Many area farmers and business leaders worry about a trade war disrupting commerce with China, Mexico and other nations that have become close trading partners. But Gruenhagen sees Trump’s tough talk as part of his bargaining strategy.

“It concerns me, but it is all part of the negotiations,” he said. “Everything we do is negotiated, whether you are buying a loaf of bread in the store or buying a new tractor, it is all negotiated.”

Muscatine County, Iowa, has special ties with China because Chinese President Xi Jinping stayed with a local family here in 1985 when he was a provincial official interested in learning more about American agriculture. When he came back for a visit as vice president in 2012, many of the people whom he had met came out to greet him.

The welcoming committee, formed of local business leaders, later transformed into the still active Muscatine China Initiative, which promotes business ties and investment between the county and Chinese companies.

Recently the city of Muscatine threw a celebration for Iowa Governor Terry Branstad, whom President Trump has chosen to be U.S. Ambassador to China. The event included a traditional Chinese orchestra provided by the Chinese consulate in Chicago.

Gruenhagen thinks it is beneficial to have a Chinese leader who knows Iowa and rural America from firsthand experience.

“He certainly understands agriculture here and that’s half the battle in negotiations — understanding the people on the other side of the table,” he said.

He doubts there will be any trade disruption, despite Trump’s tough stand.

“Since we have become dependent on each other, they on our food and we on the products they provide us, we are interdependent and that is pretty important, perhaps, for a peaceful world,” he said.

Gruenhagen believes Trump will reverse what he views as a decline in the country’s global standing.

“We lost the status we had as a great superpower,” he said. “Maybe we could still be called a superpower, but we were no longer called great. I think we will be elevated to a higher position and gain more respect than we have had in the past.” 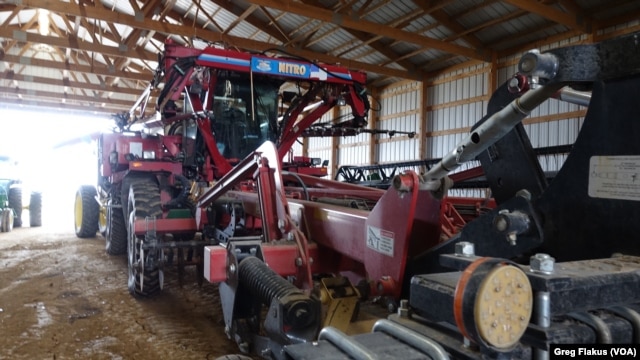 Ron Gruenhagen, 63, farms near Muscatine, Iowa, with his son and grandson. It’s an expensive enterprise, including the land, buildings and about $1 million in farming equipment.

He also hopes the Trump administration, backed by a Republican Congress will relieve the regulation burden on business, industry and farming, with the Environmental Protection Agency, he argues, being the worst offender. The administration appears set on gutting the agency.

“We are regulated to death,” he said. “It consumes a lot of our time just to comply with their rules.”

Although he favors farming methods that protect the environment and conserve soil, Gruenhagen does not believe the federal government should be telling farmers in Iowa what to do.

“I think it is better for the individual farmer to decide what is best on his farm, how to control that soil and how to make it better rather than have a bureaucrat from Washington, D.C., indicate to us what is better,” he said.

Yet environmentalists are less optimistic, arguing major international agribusiness, whose decision-makers live elsewhere, are often more concerned with profit than the land.

Gruenhagen’s son and grandson help him run the farm, and he is happy to be able to carry on the family name when they inherit the land, buildings and around $1 million in equipment.

“It is a lot of work,” he said, “but it is a pleasure because we are able to feed a lot of people and, yes, we feed the world.”