Mohammad, 16, center, and his cousin and brother escaped IS militants three days ago after their house collapsed, killing Mohammad's baby cousin and uncle. June 23, 2017, in Hammam Alil, Iraq. (H. Murdock/VOA)

Outside a salon in East Mosul last week, while her daughter beautified the clients, Umm Safaa explained why she wouldn’t allow anyone to photograph her shop.

“When Islamic State militants see something on TV that is good, they bomb it,” she said. “Look at My Beautiful Lady restaurant. Look at the perfume shop.”

A few months ago, militants attacked both businesses when they were featured on the news as signs that “Mosul is coming back” after nearly three years under IS rule. At least 26 people were killed in the attacks, but locals said the death toll was far higher.

On Friday, suicide bombers hit a busy market in East Mosul while Iraqi forces in West Mosul battled for IS’s last stronghold. It is not known how many people died or were injured that day, but like most days in Mosul, the violence was overwhelming. 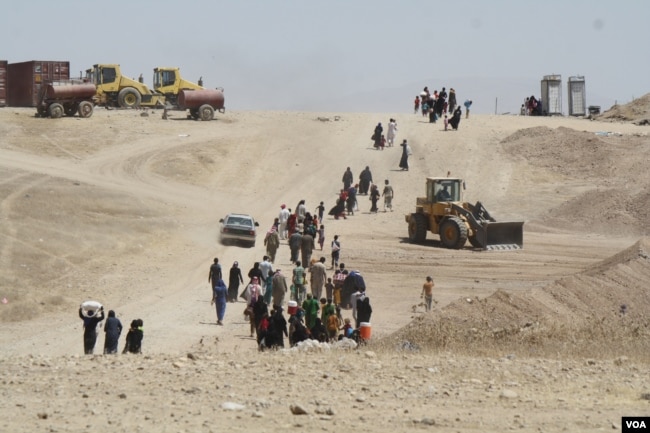 And as Iraqi forces poise themselves to win the battle for Mosul city in the coming days or weeks, some locals fear that when this war is over, rebuilding infrastructure will not be enough to end more than a decade of extremist brutality and build a lasting peace.

Frequent extremist attacks in Mosul after 2004 led to heavy-handed governance, in turn leading to popular distrust of the military, said Zainab, 40, in her East Mosul home. So when IS took over, there was little if any resistance among families who stayed in the city.

“Things are better now,” she said. “The military doesn’t harass us.” With almost all of her furniture sold for food under IS rule, she offered a single orange plastic chair to guests, saying that improved relations between the military and the public would help quell extremism, but not necessarily mean an end to the conflict.

“We are afraid IS may take over again in a few years,” Zainab said. “Before they retreated, they wrote on building walls: ‘We will be bigger and stronger. And we will be back.’ ” 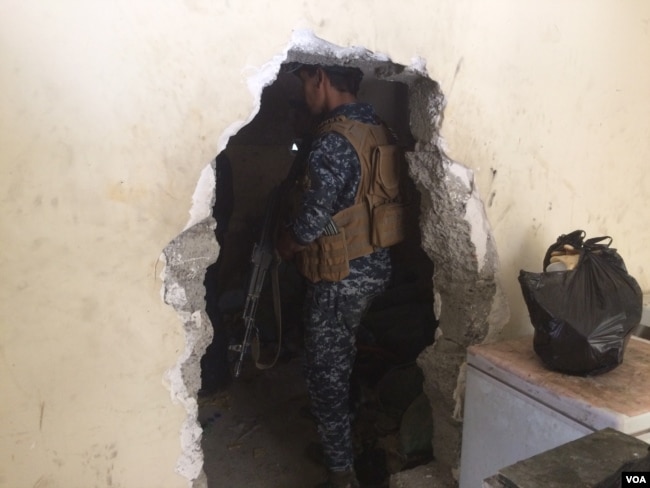 Across West Mosul, homes have holes in the walls that IS militants forced families to make so they could travel from house to house without being seen by airstrikes. Soldiers now use them in the areas they’ve captured to avoid IS snipers. June 23, 2017, in Mosul, Iraq. (H. Murdock/VOA)

While East Mosul struggles to recover amid ongoing attacks, much of West Mosul is a wasteland, with bodies buried in gardens and under the rubble. Dead IS fighters rot in the streets while families flee, starving and often injured from the battle that still rages in the Old City.

As many as 100,000 civilians trapped inside are now referred to as “hostages” as IS militants use them as human shields in the battle.

“An airstrike hit our house, but we stayed hidden under the collapsed roof,” said Mohammad, 16, sitting on a hard mat in a refugee camp outside the city three days after his family fled. His single foot was bandaged, and dried blood spotted his calf. His other leg was lost to a mortar strike in March.

When Iraqi forces got close to his broken home, “they shouted, ‘Get out! Come!’ ” Mohammad said, urging families to run to safety behind Iraqi lines. His father raced across the rooftops of neighboring houses with Mohammad on his back.

“My parents will return here later,” Mohammad added, explaining his father’s absence in the camp. “They went back to find the bodies of my uncle and my cousin.” Ahmed, the cousin, was 1 year old. 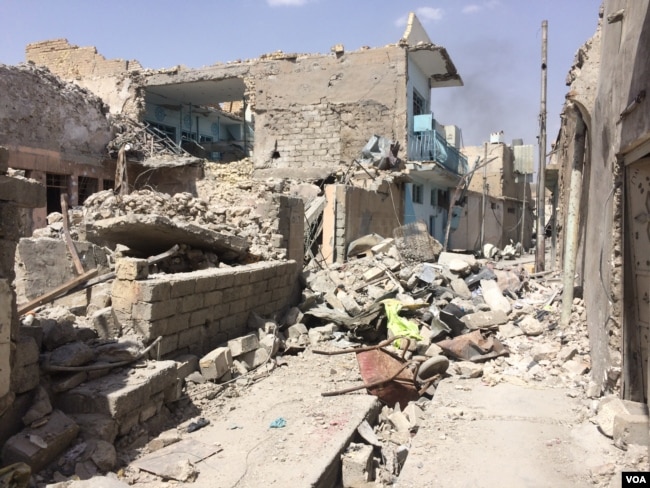 Old Mosul, IS’s last stronghold in the city, has narrow streets and old buildings, forcing soldiers to fight IS on foot and making airstrikes more deadly than ever, June 23, 2017, in Mosul, Iraq. (H. Murdock/VOA)

As people flee the Old City by the thousands, it is still unclear how long it will take before the battle is done, according to Brigadier General Mohammad al-Khodary, a spokesman for Iraq’s department of defense, at a field hospital just outside the battle zone.

“Journalists keep asking when we will have victory. But it’s more important to rescue the hostages inside than to capture the area,” al-Khodary said.

By evening on Friday, dozens of wounded and dead civilians were whisked to that hospital in humvees. Soldiers said suicide bombers were fleeing, disguised as refugees. Families also were hit by airstrikes, mortars and IS sniper fire.

“There are so many families still trapped under IS,” said Iraqi Special Forces Lieutenant General Ma’an Zaid Ibrhahim. “God willing, we will free them all.” 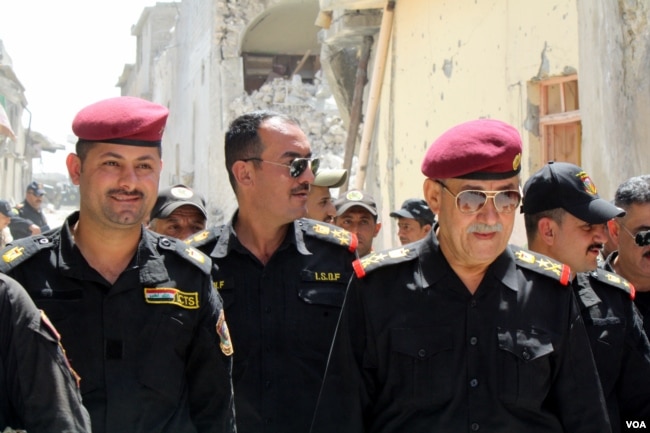 For the Iraqi military, moving forward after the fall of Mosul will mean moving to other areas of Iraq still controlled by IS, including Tal Afar, a city located about halfway between Mosul and the Syrian border.

For Mosul residents, however, it will mean rebuilding neighborhoods, water and electrical infrastructure, businesses, roads and lives.

In East Mosul, construction already is underway. Bodies of fallen IS fighters and others have been cleared away or buried. Airstrike holes are being filled. Running water and electricity have been restored in many places.

After so much destruction, however, the process is slow and costs more money than the local government has, according to Ahmed Saleh al-Jabouri, Mosul’s assistant municipality director. 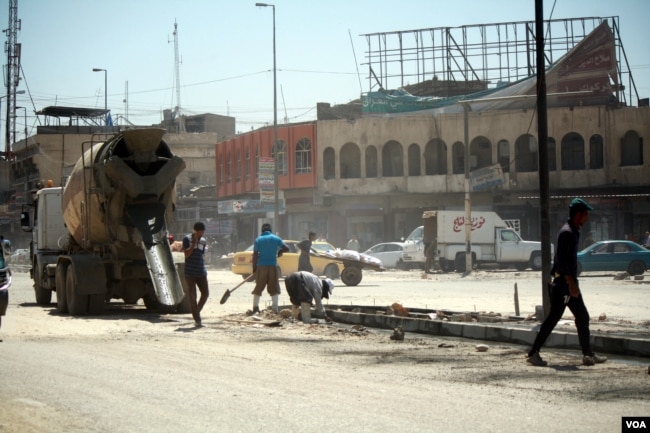 Construction is underway in East Mosul, with many roads and buildings already fixed. But officials say the distruction from IS and the war was so extensive, they don’t know how long it will take to rebuild, or how much it will cost, June 8, 2017. (H. Murdock/VOA)

“We don’t know exactly how much we need because of the extreme destruction,” he said in his office in Mosul, formerly a headquarters for local IS leaders. “For example, a single car bomb can destroy an entire neighborhood.”

Rebuilding lives, he added, will require more than just roads. Government workers in Mosul widely expect to be paid back salaries from Baghdad after they were cut off three years ago when IS took over, and only a few groups of government workers have started receiving any salary at all.

At a nearby high school, teachers say lack of salaries is cutting far deeper into recovery efforts than most people realize. Most teachers have not been paid since schools reopened in January, according to Ode Ghanem, the school principal, leaving the already crippled system staffed with deeply impoverished volunteer academics.

“Our situation would make rocks cry,” said Ghanem. “We don’t understand why our leaders are not crying.” 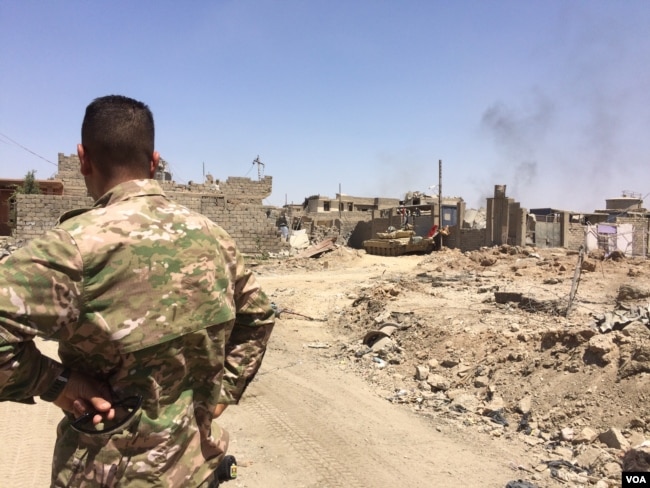