FILE - Iraqi Shi'ite fighters from the Popular Mobilization units deploy as they fight alongside Iraqi forces against the Islamic State jihadist group, June 9, 2015.

With Iraqi forces closing in on the last redoubts of Islamic State fighters in the western half of Mosul, questions about a post-IS city are becoming more urgent.

What tactics the terror group could adopt after losing control of Mosul is a key question — and will partly shape how politicians in Baghdad decide to govern Iraq’s second-largest city. The consequences could be fateful.

A prolonged bombing campaign by sleeper cells thought to be seeded in the city will mar efforts to reconcile sectarian groups, say analysts.

Kurdish intelligence officials suspect the jihadist terror group will wage a relentless suicide bombing-based insurgency and will maintain it across northern Iraq, using remote and rugged terrain as bases from which to launch its attacks.

They estimate hundreds of IS fighters have escaped Mosul in the last few months, and they don’t discount the influence of the terror group’s leader, Abu Bakr al-Baghdadi.

Brutal, asymmetrical warfare could worsen rapidly if the Shi’ite-dominated government in Baghdad seeks to govern Mosul with a heavy hand, or fails to reconcile Iraq’s competing ethnic and religious sects. 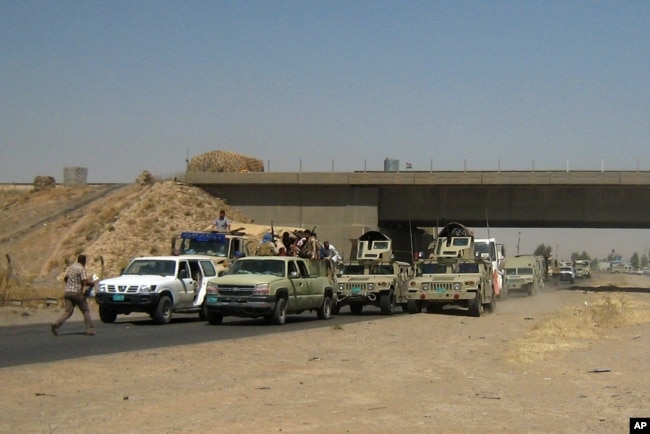 FILE – Iraqi security forces in uniforms and plainclothes head to Baghdad in the main road between Baghdad and Mosul, a day after fighters from the Islamic State of Iraq and the Levant took control of much of Mosul, June 11, 2014.

The government’s own sectarianism was a major factor in the rise of Islamic State. Its apparent favoritism toward Shi’ites helps explain how, in 2014, a few hundred jihadist fighters managed to seize Mosul in just a few hours. Despite claims now to the contrary, large numbers of the city’s Sunni Muslims celebrated the arrival of the militants because of their anger at the perceived sectarian abuses of the Iraqi government.

The central government appears to have learned from the past and has been careful to keep Shi’ite militias from fighting inside the city, positioning them on the western and southern outskirts of Mosul during the months-long battle. But the conflicting agendas of Arab Sunnis and Shi’ites, as well as Kurds and Assyrians and Yazidis, risk colliding again in the future.

In a paper last year for the Center for Middle Eastern Strategic Studies, a think tank based in the Kurdistan capital, Irbil, Salahaddin University history professor Othman Ali warned that “divergent and clashing interests” will result, at best, in “a significant amount of uncertainty for the post-IS Mosul.”

At worst, there is a risk that sectarian divisions will flare up quickly, especially over how Mosul should be rebuilt and governed and, above all, how it should be policed.

Before the battle for Mosul was launched, and while sectarian groups bickered over the timing and who should participate in the assault, Kurdish leaders argued a deal should be struck on governance for post-IS Mosul — both the city and the outlying province.

Nechirvan Barzani, prime minister in the Kurdistan Regional Government (KRG), told an economic conference in Irbil: “All the political and religious components should have deserved roles in the political process and determination of the future of the region and how they want to be governed.”

In the event, no deal was reached. Washington was in a hurry to get the battle started.

“If we try to resolve everything before Mosul, Daesh [IS] will never get out of Mosul,” U.S. envoy Brett McGurk told reporters.

The worry now is that the government of Iraqi Prime Minister Haider al-Abadi will reimpose a government structure on Mosul and the surrounding Nineveh province similar to what existed before IS seized the city — meaning that the whole city will remain as a governorate of a Shi’ite-dominated state apparatus.

Iraqi Shi’ite leaders and Iran have little time for the demands of Kurds and minority groups, who want a decentralized administration for the province, able to provide Mosul’s various religious and ethnic groups some degree of self-rule, or for a break-up of the province into smaller provinces. The latter proposal is favored by the KRG, which lays claim to a chunk of the province.

And many in the minority religious communities — Christians, Yazidis, Kakais and Shabaks — have been campaigning for their villages to come under KRG rule. 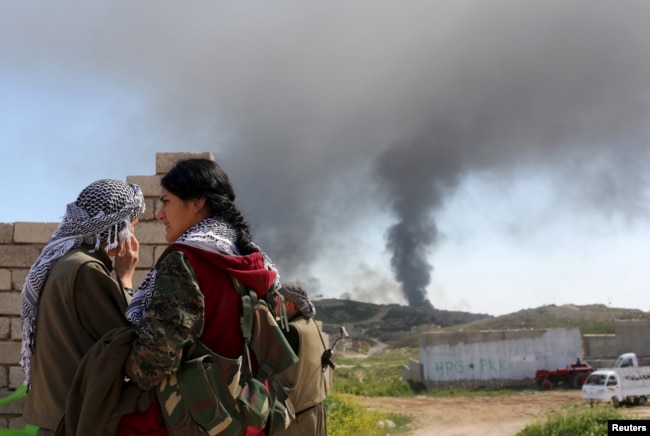 Adding to the complexity, outside powers such as Turkey and Iran are eager to try to shape the future of Mosul. Turkey has three main aims: to shrink the sanctuaries in northern Iraq of Turkey’s outlawed Kurdistan Workers’ Party, or PKK; to safeguard the rights of Turkmen communities in northern Iraq; and to block Iran from expanding its influence via the Shi’ite militias of the Popular Mobilization Units west and south of Mosul.

In his paper exploring the longer-term prospects for Mosul, Othman Ali argued: “Only an effective coalition presence in Mosul after the defeat of IS and the desire of the concerned parties for compromise will prevent another wave of bloody encounter in Mosul in the post-IS era.”

U.S. officials have indicated they, too, believe a healthy coalition presence needs to remain in northern Iraq. On a visit to Iraq, Secretary of Defense Jim Mattis told reporters that, after Mosul’s capture, there shouldn’t be a hasty withdrawal of the more than 9,000 American and coalition forces currently in Iraq.

In an opinion article in The Washington Post in March, the Iraqi prime minister acknowledged how important coalition assistance will be, from military expertise to investment to technical know-how. “Having spilled our blood together with the United States to win this war, we want to work together to win the peace,” he said.

He added: “We ask the United States to join us in urging the international community to fulfill its funding pledges to secure and stabilize our communities and prevent ISIS and al-Qaida from reemerging. We also need U.S. know-how and investment as we revive our economy and renew our democracy.” ISIS is an acronym for Islamic State. 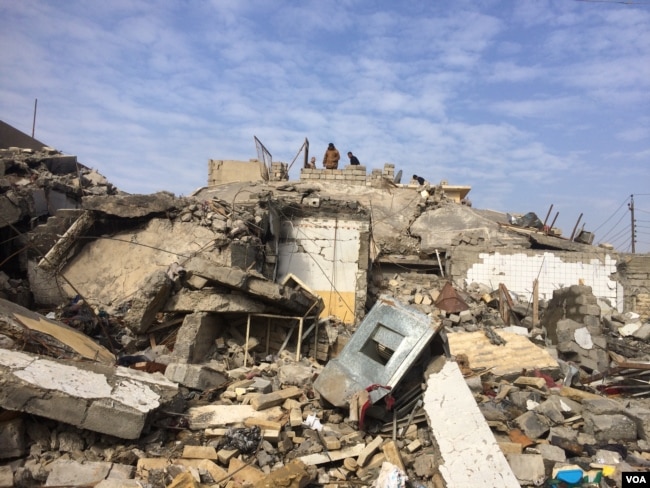 FILE – Families sift through the destruction as many homes, hospitals and other buildings were destroyed by Islamic State or in the fighting over the past four months in Mosul, Iraq, Jan. 30, 2017. (H. Murdock/VOA)

Much will depend on how quickly the government can restore essential public services and start to rebuild the ruined city. Another factor will be how Iraqi forces root out IS sleeper cells in Mosul and how justice is meted out to those who worked with IS during the jihadis’ rule. The playing out of retribution, revenge and sectarian vendettas could rapidly derail hopes for reconciliation.

The danger of Shi’ite atrocities has been highlighted by rights groups, who have urged the Iraqi government not to allow Shi’ite militias to enter the city. But there are high risks also of an intra-Sunni bloodbath.

Sunnis who suffered at the hands of the jihadists, who saw relatives butchered by militants or were forced and threatened to give up a daughter for marriage to an extremist, are likely to take out their anger on fellow Sunnis — even neighbors — who collaborated with the terror group, analysts say.

Political psychologist Maha Hassan Bukir, an academic at Salahaddin University in Irbil, draws a parallel with what happened after the 2003 U.S. invasion of Iraq.

“People extracted revenge on the Baathists, many of whom fled their homes and tried to hide themselves in other Iraqi cities or left the country and went to Syria,” she said. And many of those Baathists later joined IS, bringing to the terror group their military expertise.

“In my opinion, we will see a similar revenge cycle playing out in Mosul,” she said. “Most likely it won’t happen immediately but, sooner or later, we will see it.”