On the day Abu Yousef, his wife and their four children arrived at the Khazir camp, a sand storm hit, forcing the exhausted refugees to race into tents, Iraqi Kurdistan, Nov. 1, 2016. (H.Murdock/VOA)

A week ago, Abu Yousef arrived at this camp during a dust storm, with his wife and four small children in tow. Relaxed and now without the scruffy beard he grew while living under Islamic State rule, he settled into the relative safety of a camp that has gone from empty to overflowing in just two weeks. A former resident of a town near Mosul – a region which IS fighters held for nearly two years - he told VOA the story of how he barely escaped death at the militants' hands, translated here from Arabic and edited for clarity.

I was a police officer when Mosul fell to Islamic State militants. When they captured my town, Bashiqa, they made us – police and other government workers – go to Mosul to meet with IS officials and promise to be good Muslims.

I was surprised, I had been a Muslim for all 30 years of my life. But they said, “You worked for the Iraqi government which is against Islam.” They cursed at us and demanded we give them our weapons. 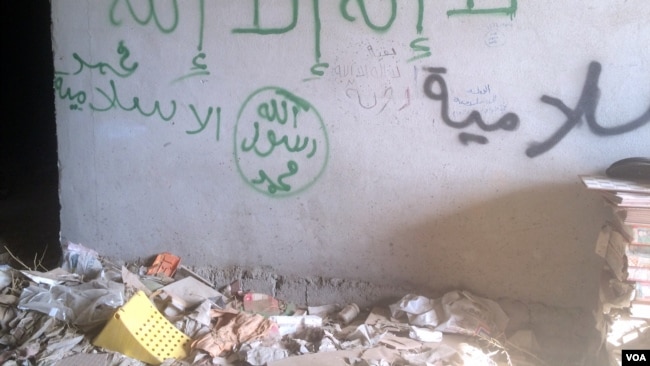 Islamic State militants have left tunnels and buildings in rubble in all the villages and towns they have been pushed out of, near Khazir camp, Iraqi Kurdistan, Nov. 7, 2016. (H.Murdock/VOA)

They told us to say “There is no God but the one God and Mohammad is his Prophet” as we often do as Muslims. We didn’t know why we needed to say it at that moment.

But then the militants hugged us and said, “You just became a Muslim.”

How did I just become Muslim?

Two months later IS militants came to my house. They said, “Are you Abu Yousef?” I said, “Yes.” They handcuffed me and forced me into a car. After about a 30-minute drive they put me in a cage about a square meter large and left me there for the night. In the morning they took me to a room and sat me in a chair. Sitting opposite to me was a bearded man wearing all white. They called him Sheik Abu Deema – The Father of Blood.

“Why are you an infidel?” the sheik asked me.

“I’m not, I’ve been a Muslim my whole life, and lately I even renewed my faith with you all,” I said, and then lied to them. “I was with government police before because I needed a salary. It’s the only reason.”

“No, you are an infidel,” said Sheik Abu Deema, “We will cut off your head.”

For the next seven days I was kept in the cage, blindfolded. They took me outside for whippings and beatings and fed me only once a day, a bowl of soup and bread. 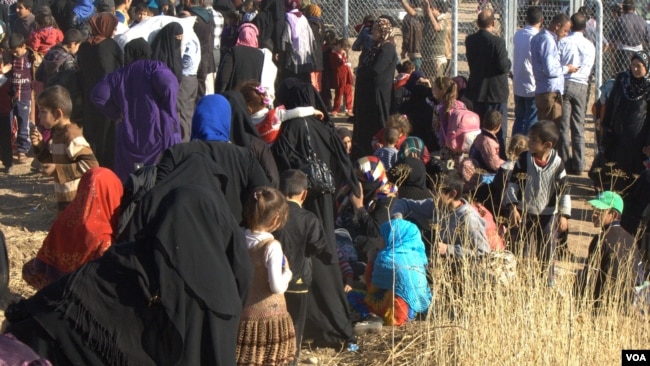 Outside Khazir camp, thousands of people wait in line to register in Iraqi Kurdistan, Nov. 5, 2016. More than 45,000 peoplea are said to have been displaced since the Mosul offensive began more than three weeks ago. (H.Murdock/VOA)

At the end of the week, a soldier put a bullet in my pocket, and said, “Don’t lose this bullet. Tomorrow, we will kill you with it.”

The next day someone else approached my cage and demanded the bullet back. “No, take this bullet instead,” he said. “Tomorrow we will kill you with it.” This went on for three days, every day a new bullet. On the fourth day they said “This, yes this, is the day we will kill you.” I believed them.

They brought me back to Sheik Abu Deema and forced me on my knees. They blindfolded me and I heard the sheik bark, “Kill him.” I felt the gun on my head and heard them pull the trigger. But there was no bullet. An Islamic State document certifies its holder (name blurred out) has pledged to be a true Muslim, according to IS standards. The document is not a pledge to join or work with the group. Khazir camp, Iraqi Kurdistan, Nov. 8, 2016. (H.Murdock/VOA)

The sheik gave the order again. “Kill him,” he said. The barrel touched my head, and the soldier pulled the trigger. Again there was no bullet. He did this three times.

Then they removed my blindfold, helped me up and said, “Sorry, you are not an infidel. You are our brother.”

They gave me 10,000 Iraqi dinars (about $9) and I left. But the psychological punishment stayed with me.

This story was originally published Nov. 11, 2016 on voanews.com