Iraqi soldiers say the tower in the distance is IS's main mosque in western Mosul and sniper fire regularly lands across the river aimed at them on Feb. 12, 2017 in Mosul, Iraq. (H.Murdock/VOA)

As militants of the so-called Islamic State face off with Iraqi forces battling for Mosul, former local police officers in areas controlled by IS are rounded up and many are killed. VOA talks to one police officer who survived the last weeks of terror before Iraqi forces took his neighborhood, believing that the same cruelty is currently being inflicted upon residents of western Mosul. Fowas Khayradeen tells his story near his home on the streets of Mosul in Arabic, edited for clarity.

They blindfolded us, but I could smell it in the air. We were in The Forest district of Mosul. There were 85 of us former police officers, or anyone who ever served in any kind of security force before IS.

I don’t know how long we stayed in the first place. We counted 58 men in the tiny room. We couldn’t lie down to sleep because it was too crowded and the windows were so thick I couldn’t tell if it was night or day.

They gave us a slice of bread and a small triangle of cheese each day to eat.

One day they grabbed me out of the group and shoved me into the back of a pickup truck. They kicked and smashed my head with a gas container. I was sure they were going to strap me with bombs and force me towards the Iraqi forces’ frontlines before they blew me up.

But then they brought me to another house. They removed the blindfold and I saw the man beating me was actually a Syrian boy. He looked 14-years-old.

At the next place they whipped us as we climbed the stairs. One man kicked us and said in a loud whisper, “No talking! If the neighbors hear us they could inform on us. An airstrike could hit us!”

In that moment, I wished an airstrike would hit us. 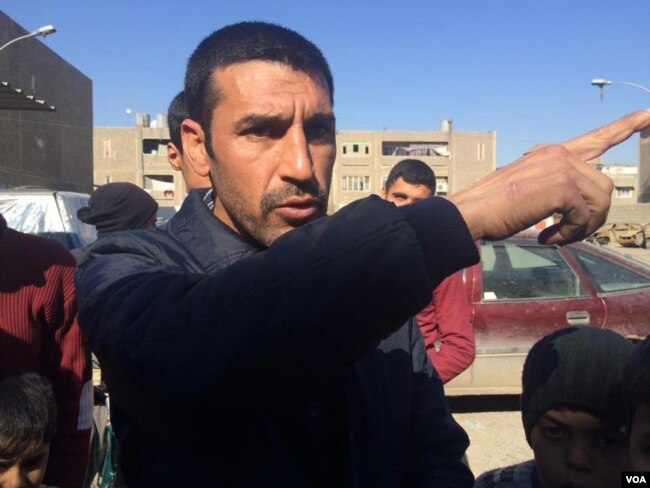 Former local police officer Fowas tells his story near his home in Mosul, Iraq on Feb. 8, 2017. In areas still controlled by IS, he and scores of other residents say, former local police are rounded up as Iraqi forces approach. Many are killed. (H.Murdock/VOA)

There were three of us and three militants in a room. They blindfolded us again and sat us in chairs.

“What did you do for work before we came?” asked one militant.

“I was a local police officer,” I said.

“How long did you serve,” he asked.

“You were an infidel for that many years?” he said. “Where do you live?”

“I live in The Apartments area,” I told him.

“Iraqi Special Forces have taken part of that area. What do you think?” he asked.

“I don’t know,” I said. I was careful not to look pleased.

“If the Iraqi government comes back, will you re-join the police?” he asked.

“I cannot swear,” I told him. “I fear God more than I fear you.” Another militant grabbed my neck.

“Will you join them if they come back?” he demanded.

“No,” I said, promising, but not swearing.

“Okay we will review your case,” he said and the interrogation was over. Five minutes later he had news. “You are so lucky the Caliph is forgiving. I would have killed you.”

“Bring him some warm bread,” he ordered another militant. And they did. On streets of Iraqi-controlled eastern Mosul, evidence of the war is omnipresent, like this armored car bomb on Feb. 12, 2017. (H.Murdock/VOA)

Then they said they would bring us home. I didn’t believe it. They had told us they would kill us so many times.

But five days later I arrived at my apartment around 4 p.m., having walked most of the way after they kicked us out of the car and ordered us not to get taxis.

Three militants were stationed outside my door, and Iraqi forces were close. I could hear the militants talking.

“Watch out for airstrikes,” said one.

“Where are the infidels?” asked another. He meant Iraqi Special Forces.

“They got into the neighborhood over there,” the first replied, meaning The Teachers Apartments down the street.

Then I realized he was crying. He was a kid, maybe 15 or 16 years old. He was terrified.

After hearing that, I told my mother we could probably run to my brother’s house if we left now. But they blocked us at the door, saying, “Get back! Don’t come out again!”

Then a bomb hit the militants. The building was on fire and there were 15 children and 12 adults inside. We passed the children out the back door and saw one of the militant’s bodies on fire. One of my neighbors grabbed a bucket of water.

“Now we are free”

A few minutes later, I saw four Iraqi soldiers coming towards us. I was scared they were IS dressed as soldiers, finally coming to cut off my head. I heard one use a militant expression. “Hajjia, lift your veil so we can see who is who,” one said.

It’s a common enough word, “Hajjia,” a respectful term for elderly ladies. But IS used that word all the time.

“It has been eight months since I have had a cigarette,” I told one soldier. “Can you give me one?’

They said, “We don’t have cigarettes.” Then I was really scared. IS militants forbid smoking, but Iraqi soldiers with no cigarettes among four of them? This never happens. I asked to see their identification cards.

They showed me their cards, and the next day returned with their unit after expelling IS from our area.

“Are you still suspicious of us?” one soldier asked me, laughing. We gathered around and hugged them and kissed them.

“No,” I said. “For two-and-a-half-years I have been trapped in my home under IS. Now we are liberated and now we are free.”

This story is only 30 percent of what we have suffered.

This story was originally published Feb. 12, 2017 on voanews.com