Rain or shine, Lauren Culler does her pond-side fieldwork in full rain gear. She’s not worried about getting wet. It’s the mosquitoes.

In the spring, when the ponds on the fringes of Greenland thaw, the mosquitoes emerge in great, buzzing, voracious clouds.

Culler is a Dartmouth College ecologist who studies the web of life in and around these ponds. That means long stretches of time working next to mosquito breeding grounds.

“It can be quite miserable,” she said. Impermeable outerwear and a headnet are essential mosquito deterrents. Otherwise, “they will drive you crazy.”

They’re a nuisance to biologists, but they are a real threat to caribou.

These animals, a species of deer, spend the brief summer months grazing on Arctic greenery. Harassment from the biting mosquito hordes can be so bad that the caribou flee their grazing grounds for cooler snowbanks, which mosquitoes avoid.

But time spent escaping mosquitoes is time not spent fattening up for the long winter ahead. The intensity of the mosquito attacks can mean the difference between life and death.

Around the world, climate change is rippling through ecosystems, affecting creatures great and small. But how these changes will affect ecosystems is hard to predict. Each one is a complex web of life, a Rube Goldberg device of predators and prey.

In Greenland, the caribou’s fate is intertwined with that of an aquatic beetle.

Every spring when the ice melts in the Arctic ponds, a battle for survival begins. Thousands upon thousands of mosquito larvae wriggle in the shallow water.

They provide an all-you-can-eat buffet for the beetle larvae.

The beetles “feed like spiders feed,” Culler said. “They inject these digestive enzymes first. And they liquefy the internal contents of the prey and suck it back up.”

Culler thought climate change might give the beetles an edge and cut down on the mosquito hordes.

Warmer waters speed up the beetles’ metabolism. They eat more mosquito larvae per day. The question was, would it make a difference?

“Is it that more mosquitoes are being eaten in a warmer year, so fewer are likely to emerge? That was kind-of what we thought would happen,” Culler said.

In their computer model, warmer conditions actually favored the mosquitoes. They matured a few days faster in warm water than in cold. The less time they spend in the water, the better for them.

“That’s three or four fewer days where you have the risk of being eaten by one of those beetles,” she explained. “In the simulations that we did, we found that actually really matters, and that the mosquitoes win in that situation.”

When mosquitoes win, caribou may lose. Fewer may survive the winter.

But beetles are not the only mosquito-eaters lurking in the tundra. Culler is studying what role spiders may play in controlling the mosquito hordes.

“They seem to be able to cue in on the ponds right when the mosquitoes are emerging,” she said.

Locked up in ice for most of the year, the tundra ecosystem is relatively simple. Untangling the web of connections here offers a taste of the complex ways climate change is altering the entire planet. 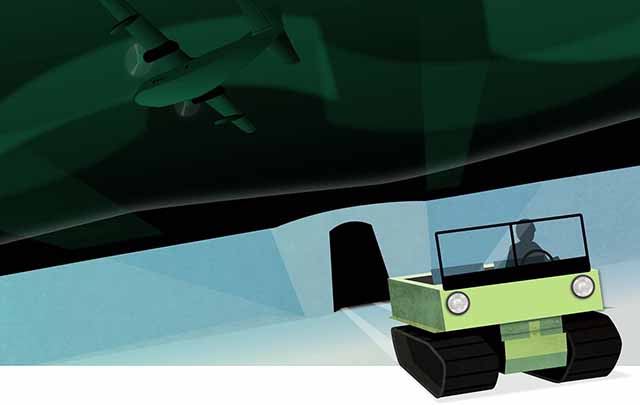 Chapter 4: Putting the Cold in the Cold War