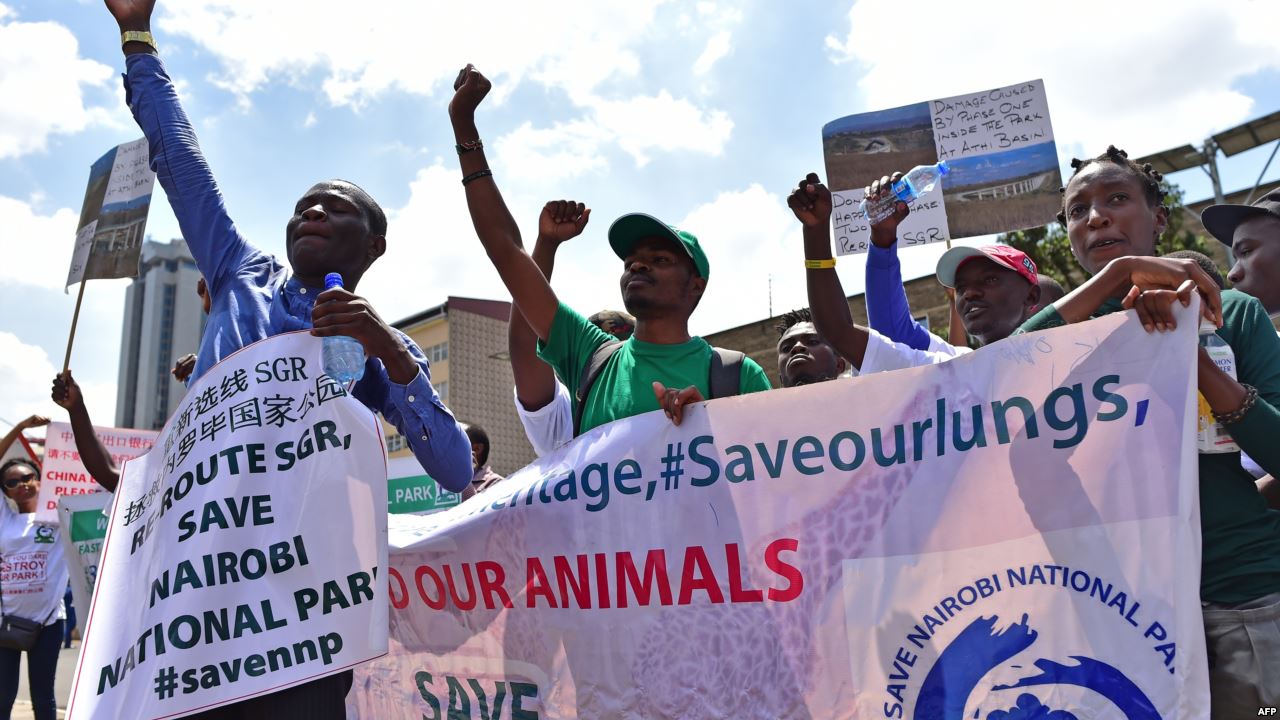 Environmental activists chant slogans as they carry placards and banners during a protest in Nairobi, Kenya, March 1, 2018, against a government decision to construct a standard-gauge railway line across the Nairobi National Park. (AFP)

Environmental activists in Kenya have pledged to take further legal action against Kenyan and Chinese corporations if contractors move forward with construction of a railway bridge across Nairobi National Park. The activists held a demonstration Thursday outside parliament.

About 100 activists chanted as they marched through the streets of Nairobi Thursday to demand that phase 2 of construction of the Standard Gauge Railway be rerouted around Nairobi National Park.

The park is a rare wildlife sanctuary located just minutes from the city center of one of Africa’s rapidly growing economic and technological hubs.

“This is a tiny park. It’s an absolute jewel to the Nairobi citizens and all of Kenya. It is crowded with guests. Everybody who comes for safari, their first stop is Nairobi National Park before they go to the Mara and all those places, and it’s a disaster if they take it away,” said Patricia Heaths.

The six-kilometer bridge planned to cross over the park is part of a much larger project – the SGR, a massive regional rail network largely funded by China. Kenya opened the Nairobi to Mombasa line last year. This second phase of the SGR in Kenya is set to connect Nairobi to Naivasha.

Environmentalists say the construction would affect the ecology of the park, endangering the wildlife and their natural habitats. Paul Mark from Friends of Nairobi National Park read a petition outside parliament. “…The purpose of this letter is to remind you of the court orders in place which stop the Kenya Railways Corporation and any other person from construction of the Standard Gauge Railway within the Nairobi National Park,” he said.

In 2017, the National Environment Tribunal ordered a temporary halt to construction in the Nairobi National Park in response to a petition from environmental groups. The activists demanded the government conduct an environmental impact study. The case is still pending.

However, Kenya Railways, a state company, and its partner, the China Road and Bridge Corporation, moved to begin construction work in the park in late February.

The Kenya Coalition for Wildlife Conservation and Management said in a statement Thursday that it would seek to have the contractors held in contempt.

Officials at Kenya’s Ministry of Transport and Kenya Railways did not respond to VOA’s requests for comment.

Marko Pruikma sits on the board of Friends of Nairobi National Park.

“Everybody who comes for safari, their first stop is Nairobi National Park before they go to the Mara and all those places, and it’s a disaster if they take it away.”

“Nairobi National Park is an open park, which means animals can migrate freely in and out the southern boundaries of the park. There will be a lot of noise because of construction in certain areas. You will see certain animals removed out of their particular area going to another area pushing out other animals, and they might go out of the park, causing extra human-wildlife conflict outside the park,” said Pruikma.

Last year, environmentalists unsuccessfully tried to stop construction of phase one of the SGR which passes through Tsavo National Park. Activists say the rail line interferes with elephant migration.

A total of seven possible routes were considered for phase two of the SGR, two of which did not pass through Nairobi National Park. The government said the current design was picked as the most cost-effective and technically feasible.

The Kenya Wildlife Service also rubber-stamped the decision to build the rail bridge over the park saying it would have minimal interference with the movement of the wildlife. 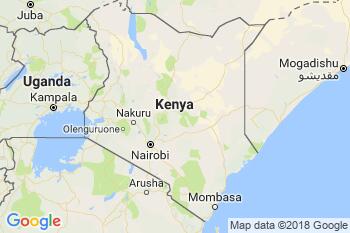