From the travel ban to DACA to the scaling back of refugee admissions, there were big changes in U.S. immigration policy this year and more likely in 2018. We welcome you to scroll through the past year in immigration with our best guesses about what is to come.

After a long odyssey, the travel ban takes effect

President Donald’s Trump Executive Order restricting travelers bookended 2017, going into effect just after the president took office in January and again, in early December at year’s end. In between, three different versions of the order were mired in the courts (see video). The final version bars entry into the U.S. of immigrants and non-immigrants from Chad, Libya and Yemen, on business, tourist or business-tourist visas; blocks entry of Iranian citizens, as immigrants or non-immigrants, but provides an exception for Iranian students with additional screening; bars all immigrants and non-immigrants from North Korea and Syria; prevents immigration by citizens of Somalia; and bars visitors from Venezuela with government ties.

2018 Forecast: The Supreme Court ruling in early December giving Travel Ban 3 the go-ahead also tossed it back to two appeals courts. “I think [they] would like to see the appeals court resolve it,” Betsy Fisher, policy director at the International Refugee Assistance Project, told VOA.

The Trump administration whittled away at immigration in 2017, but the kind of major changes Trump wants can only be achieved by the U.S. Congress. In August, Trump endorsed a Republican bill called the RAISE Act (PDF). It would scale back legal immigration by replacing the current family-based structure with a merit system that would award points for high-paying job offers, past achievements, English-language ability and education.

2018 Forecast: The Trump administration has indicated it will make a big push for immigration reform in 2018. But it has eluded the U.S. Congress for years. A comprehensive restructuring was drawn up by eight senators in 2013, but it was never voted on by the House.

The clock is still ticking for DACA recipients

2017 began with uncertainty for the Deferred Action for Childhood Arrivals (DACA) program and looked to end with greater uncertainty. DACA allowed some immigrants who entered the country as minors to receive a renewable two-year deferment from deportation and permission to work. After much suspense about what he would do with DACA, Trump ended the program in September, leaving it up to Congress to develop a solution. Democratic lawmakers threatened to hold up the budget unless Congress dealt with DACA. But Republican leaders said there was no rush on DACA since the recipients do not begin to lose status until March 2018.

2018 Forecast: If Congress does not agree on a legislative solution and the president does not step back in, nearly 800,000 young, undocumented immigrants could be vulnerable to deportation in 2018/2019.

The mass deportations that many feared didn’t happen this year. While detention numbers rose, removals declined. The immigration and deportation system can be slow, though, with some court hearings scheduled years from now, so as the administration continues rolling out changes to the system, and more immigrantion judges are added to clear the case backlog, the rise in detentions could well fuel an increase in deportations.

2018 Forecast: Immigration and border agencies are ramping up hiring efforts to meet Trump’s demand for 15,000 new agents and officers, as well as thousands more supporting staff. And since several policies have been ended that had shielded some immigrants from deportation - like Deferred Action for Childhood Arrivals and Temporary Protected Status - tens of thousands more immigrants may become susceptible to removal proceedings in the coming year.

Where is the big, beautiful border wall?

President Trump’s plans to erect a 1,600-kilometer-long, 10 to12-meter-tall wall between the US and Mexico have hit multiple roadblocks: no deal with Mexico to pay for it, and hesitance in Congress amid a price-tag of $21.6 billion to $70 billion. Democrats maintain there is little evidence to prove that a wall would stem illegal immigration and drug smuggling. Republicans have largely dodged the issue.  Others - including immigration and border officials - advocate for the use of modern technology to patrol the border rather than a higher, broader wall.

2018 Forecast: Eight prototypes of Trump’s border wall are undergoing testing in southern California, but there is no telling whether any of them will eventually be funded or built. At the end of 2017, US Customs and Border Patrol was hoping for funding from Congress to build 97 kilometers and repair 23 more in 2018.

Door closes to thousands of refugees

The US was on track to receive the highest number of refugees since the 1990s - 110,000 at the beginning of 2017. But the resettlement program ground to a near halt after President Trump issued a series of executive orders restricting refugee travel to the US. In September, the White House announced it would slash arrivals even further.

2018 Forecast: So few refugees arrived in October and November - the first months of the fiscal year - that the US is on track to accept less than half the 45,000 refugees that Trump’s team ok’d - already a record low in the history of the US refugee program.

Temporary Protected Status has taken a hit in 2017. The Trump administration cut three TPS countries from the list of 10, extended the protections for one more, and will decide on the remaining six in 2018. The U.S. government confers TPS status on citizens of countries who cannot return safely to their homelands. TPS holders may live and work legally in the US for renewable periods. In some cases TPS holders have been in the country for decades, but the government cautions, the program is temporary.

2018 Forecast: First up in the new year: 195,000 Salvadorans who have been in the US since 2001. They will know by January 8 whether they keep TPS status. In the meantime, proposals in Congress would toughen requirements for TPS or eliminate it.

During his first week in office President Trump directed the Departments of Justice and Homeland Security to strip federal funding from so-called “sanctuary cities” — some 300 municipalities and counties that limit cooperation with federal immigration authorities because they say they need their resources to fight local crime. Attorney General Jeff Sessions took up the sanctuary sword, putting jurisdictions on notice for protecting “criminal aliens.” California made itself a sanctuary state in October. In November, a judge in San Francisco permanently blocked Trump’s order, on the basis that it violates the constitution.

2018 Forecast: The US government has appealed the court decision. Expect the sanctuary fight to continue – in court and out. 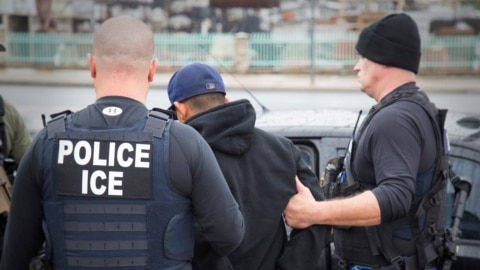 Putting the brakes on immigration

A timeline of President Trump’s crackdown on immigration.

VOA’s immigration unit has been closely following the Trump administration on immigration and refugee issues since the president took office.